Devil Black and the “What If” Factor 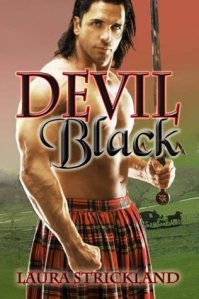 Many writers suffer from writer’s block, at least occasionally.  I can honestly say I’ve rarely had that problem.  Ideas usually bombard my brain the way cosmic radiation strikes the Earth’s atmosphere (and sometimes with as little coherence.)  My problem is holding onto the thoughts until I can do something with them.  I have scribbled plot twists on old envelopes found in my glove compartment and jotted  conversations between my characters down on the backs of shopping lists.  Scraps of paper become precious things.

I get ideas in the strangest places, and often when my mind is otherwise occupied: when I’m grocery shopping, when I’m walking the dog, when I’m cleaning the house. (I confess this happens fairly seldom, as I don’t clean as often as I should.)  I get some of my best ideas in the bathtub.  It’s as if the moment I say, “Ah!” and let my brain settle, all those ideas that have been queuing up behind the “I have to dos” come streaming in.

And I know that if I ever do get stuck for writing ammunition, I need only ask myself, “What if?”  It’s a game I love to play, one with endless answers to a wide array of questions.  Here’s me doing the dusting: “What if aliens took over the earth and they were all dogs?  What would happen to the dogs that were already here?”  Cue the plot for an uber-strange futuristic Science Fiction.  Here’s me again, this time folding the laundry: “What if a woman in nineteenth-century Oregon disguised herself as a lumberjack and lived with a work crew in the redwood forest?”  Cue an Historical Romance, maybe featuring a climactic scene with an axe fight.

When I decided to write my new Historical Romance, Devil Black, I asked myself: “What if I create a hero who’s an absolute devil?  What if he’s been denounced by everyone he knows?  What if even he believes his heart is beyond redemption?  And what if love presents him with one last chance?”

Cue Dougal MacRae, also known as Devil Black.  I knew I had to make him irresistible to look at: tall, with midnight dark hair and smoky, gray eyes – and Scottish, oh yes, he had to be wearing a kilt.  Why even bother if I couldn’t put him in a kilt?  And what sort of heroine could live up to this creation?  What if she was fiery, sometimes too impulsive for her own good, and on her own mission, nursing her own past hurts?  What if the last thing either of them expected was an undeniable attraction and an unstoppable desire?

As usually happens when I write, Dougal and his heroine, Isobel, took on their own personalities and began to tell their own story.  They brought a heap of difficulties with them, including danger and more than a little violence.  Most of all they brought passion that made me ask, “What if they do manage to live happily ever after?”

Here’s the blurb:  Disgraced in her father’s eyes, Isobel Maitland travels to Scotland, determined to purchase her sister’s happiness at the cost of her own. But when her coach is held up and she is abducted by a dangerous highwayman, she faces an unexpected choice: suffer the loveless union to which she has resigned herself, or marry this ruthless, Scottish outlaw who can ignite her desire with a single touch.

They call him “Diabhal Dubh” – Devil Black – and he spends his days terrorizing the countryside, trying to outdistance the memories that torture him. The King has decreed he must settle and take a wife. And when he steals the alluring woman betrothed to his enemy, Dougal MacRae sees a way to both answer the King’s demand and obtain the revenge he has sought so long…

If you would like to share Dougal and Isobel’s story, Devil Black is available from Amazon in both ebook and print formats

Or from the publisher, The Wild Rose Press’s web site.

Be sure and visit my author’s web page to learn about other Celtic heroes I’ve created, at: www.laurastricklandbooks.com

And next time you want to tell a story, just ask yourself, “What if?”

Thanks Laura for joining us today.