First, thank you to Leanne for inviting me to be on her blog. It’s a pleasure to connect with your readers. Second, sorry to hear about the migraine problem. I’m a fellow sufferer and have been for decades. I had the first as a teen, then they took a break for a while, and then started again monthly (as in tied to hormones!) in my thirties. My doctor thinks I’ll get relief with menopause when my hormones all change again. At least that gives me something to look forward to besides hot flashes. Anyway, to my post:

I suppose when you think of women in generations past, particularly in the nineteenth century, you might think “traditional,” meaning a little schooling, an early marriage, a few babies, and definitely a stay-at-home wife. You might think “housewife,” and probably quite desperate—with frustration, unfulfilled dreams, and longings. I couldn’t stand that for my heroines. That way led to “female hysteria” of the worse sort. When I started writing An Improper Situation, my heroine, Charlotte, needed a way to support herself. Luckily, in the age of a reliable penny post, a network of telegraph offices, the cross-country iron horse (train), and even the newly invented telephone and typewriter, Charlotte could be a freelance writer. She had a home office in much the same way as we can today with our computers and Internet.

My non-traditional heroine was born. She wrote under a man’s nom de plume, but rather than feeling desperate to be a housewife, she balked when presented with two children who needed a mother. That was when the book was still entitled A Readymade Family. Then, as she grew to love the whole mothering thing—as I did, I will confess, having my first born as I wrote this book—the title changed to A Little Bit of Heaven. That’s what it represented for fiercely independent Charlotte, having her solitary existence upturned by two children and their handsome lawyer, Reed. Frankly, she was tired of all that independence and alone-time, anyway. Eventually, by the time I was finished with the rewrite, the perfect title emerged, An Improper Situation, which represented two things: one, my improperly independent heroine who was a writer and a breadwinner, and who even traveled across the country without the benefit of a man’s protection, and two, it was beyond improper for her and Reed to share their passion out of wedlock, but share it they did!

When the sequel began to gel in my brain, Sophie, Reed’s sister, popped up, fully formed, as another independent lady—though, unlike Charlotte, she didn’t intend to be. She was ready to marry and settle down. When a thoughtless man broke her heart, she decided to pursue her great passion, classical piano, and use her gift for the career that called to her. The conflict in An Irresistible Temptation arises from the diverging goals of Riley, the hero, destined to practice medicine in a small town, and Sophie, destined for a life in the orchestra of a big city. They’re sorely tempted to take the easy way out and give in to the passionate temptation of loving each other (of course, they give in to the passion a few times during the course of the story). Riley loves Sophie enough that he can’t let her forsake her gift in order to be his wife. Sophie loves him enough to give up her piano and become a desperate housewife. How do they resolve this terrible dilemma?

My third heroine is the least traditional of all in terms of romance novels, not for her independence, but for her personality—she’s an unlikable minor character in the first two standalone books. Some might call her a bitch. I call her “Miss Understood”! Eliza is selfish, mean-spirited, and has a temper. Why? We find out in the third standalone novel that I’m writing now. The title hasn’t come to me, but she is my toughest heroine. First, I need to reform her character in the eyes of the readers, though there is one special man who already loves her to pieces. Second, she has to find her place in this world. She makes love to one man, then spurns him, gets engaged to another man whom she never loves and eventually dumps him, then, due to a lost wager, marries another man whom she really hates, making her my first truly desperate housewife. Luckily, she has a great hero on her side, who will do anything to help her. Or will he?

I will give away one free ebook of An Improper Situation or An Irresistible Temptation to a reader who leaves a comment. 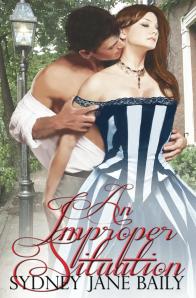 Here’s the super-short blurb for An Improper Situation:

Charlotte should be the catch of Spring City, CO. But she cloaks her identity behind her male pen name. She won’t risk heartbreak, then a stranger arrives. Boston lawyer Reed Malloy has a mission—deliver two orphaned children to their cousin. He’s not prepared for Charlotte’s irresistibility, or her flat-out refusal to raise her kin. Sinister forces and scorned women conspire to keep them apart.

It’s available in print and ebook from Amazon, and in digital form everywhere ebooks are sold.

It’s been great visiting with you. Please stop by my site to learn more about my books and a bit of history.

Thanks Sydney for being on my blog today.

One thought on “Guest Author Monday”