Please welcome with me our guest author today — Mitzi Flyte

“My, Grandma, what big teeth you have…”

“All the better to eat you with…”

We grew up with these tales of wolves.

But are wolves really bad-actors?

I thought about this recently while watching the 2010 movie, the remake of the classic “The Wolfman”. The portrayal of the main character is one of a monster who has sharp fangs, long claws and lives to dine on the blood of his victims during the full moon. Just like the animal, right?

Throughout history humans have feared the wolf because it is a large predator. At one hundred pounds for a male and slightly less for a female, a wolf is about the size of a German Shepherd. They are usually a mottled gray in color but can be black, reddish brown and even white. They are pack predators that can and do target domestic herd animals such as goats and sheep. However, since records started being kept in the 1800s there has been no documented case of a healthy wolf attacking a human—any recorded attacks were by a rabid wolf of a wolf-dog hybrid. Wolves are naturally afraid of humans and tend to “disappear” into their surroundings when humans are nearby. L. David Mech, the author of The Wolf, writes: “Anyone who has spent much time in wolf country will verify that the wolf is one of the wildest and shyest of all animals…”

Throughout American history wolves have been feared and maligned by the farmer and rancher, because the wolf preyed on their domestic animals. Over the years that fear decimated the wolf population in North America, which is slowly returning. In parts of Europe wolves were hunted to extinction. By the 1890s there were no wolves at all in England.

But does the wolf deserve the reputation of being a cold-blooded, snarling, killing machine? Maybe not. The wolf is a social, pack animal; the pack consists of an adult pair and their offspring. It takes a pack to raise the pups. The alpha pair may even “adopt” offspring of other wolves. They are loyal and it is believed that wolves mate for life.

They have a wide area for hunting prey, are very territorial and will defend that territory to the death. Their prey is usually the very old or the ill of a herd. Wolves provide a natural means to keep herds of wild, hoofed animals at a manageable size. An overabundance of deer, antelope, etc. leads to a decimation of their food source, vegetation and trees.

Once on the endangered lists, their numbers are growing; however, there continues to be a backlash against these animals. 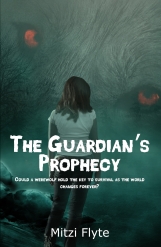 In the soon to be release, The Guardian’s Prophecy by Mitzi Flyte, zoologist Kate Riley knows the stories of the wolf being an evil killing machine are wrong. She spent her own money establishing the Lenape Wolf Preserve to teach the public the truth. But now there are mysterious killings in the town near the preserve. The victims’ throats have been torn out by a large canine-like animal and suspicion falls on Kate’s wolves. Who or what is the cause of these strange murders? Can Kate save the preserve and prove that wolves are not evil?

To learn more and to help in the preservation of wolves in the wild, go to:

“We have doomed the wolf not for what it is, but for what we deliberately and mistakenly perceive it to be –the mythologized epitome of a savage ruthless killer – which is, in reality, no more than a reflected image of ourself.”  Farley Mowatt, Never Cry Wolf

One thought on “Guest Author Monday”