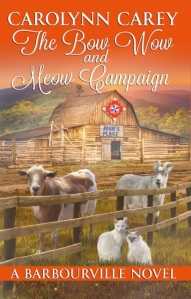 I know. I’m a day late posting, but I had to finish reading the ARC for Carolynn Carey’s latest release The Bow Wow and Meow Campaign, #7 in the Barbourville series. It is a cute story set in Barbourville between Josh the ‘cat and dog’ man who bought an old run down farm and career minded Casey from Chattanooga. If you read At Home in Barbourville then you met both Josh Preston and Casey Trent. Casey is Rani’s friend who works at Tarwater’s Department store. Jogging your memory now? I thought so.

Well, Casey noticed Josh, but she decided he was poor, jobless — other than taking care of his stray animals, and that their goals were so different there was no reason she should give him a second look. Josh on the other hand must have fallen in love with her at first sight but he was smart enough to read the signs and not push his feelings for her. Which was a good move as far as I’m concerned because it took Casey quite a long time before she read between the lines. But I won’t divulge too much and spoil the story for you.  Here’s the blurb and I think it pretty much sums things up nicely. I encourage you to read it for yourself.

The Bow Wow and Meow Campaign

Casey Trent is on the fast track as associate manager for an upscale department store in the city. Josh Preston is owner of a rundown farm in the country outside Barbourville, Tennessee. Casey is known as an up-and-comer; Josh, who takes in abandoned animals, is known as the cat-and-dog man.

Casey figures they have nothing in common, but when Josh tries to interest the citizens of Barbourville in building an animal shelter, Casey offers to help. The town can’t afford to support the center, so she suggests that she and Josh collaborate to raise funds for an endowment. Thus is born The Bow Wow and Meow Campaign.

As they work together to plan their campaign, Casey begins to realize that there are depths to Josh she hadn’t previously suspected, but nothing has prepared her to learn the full truth about his past. Once she does, can she find a way to forgive him, or is their tenuous relationship doomed to fade away?

One thought on “What are you Reading Thursday”